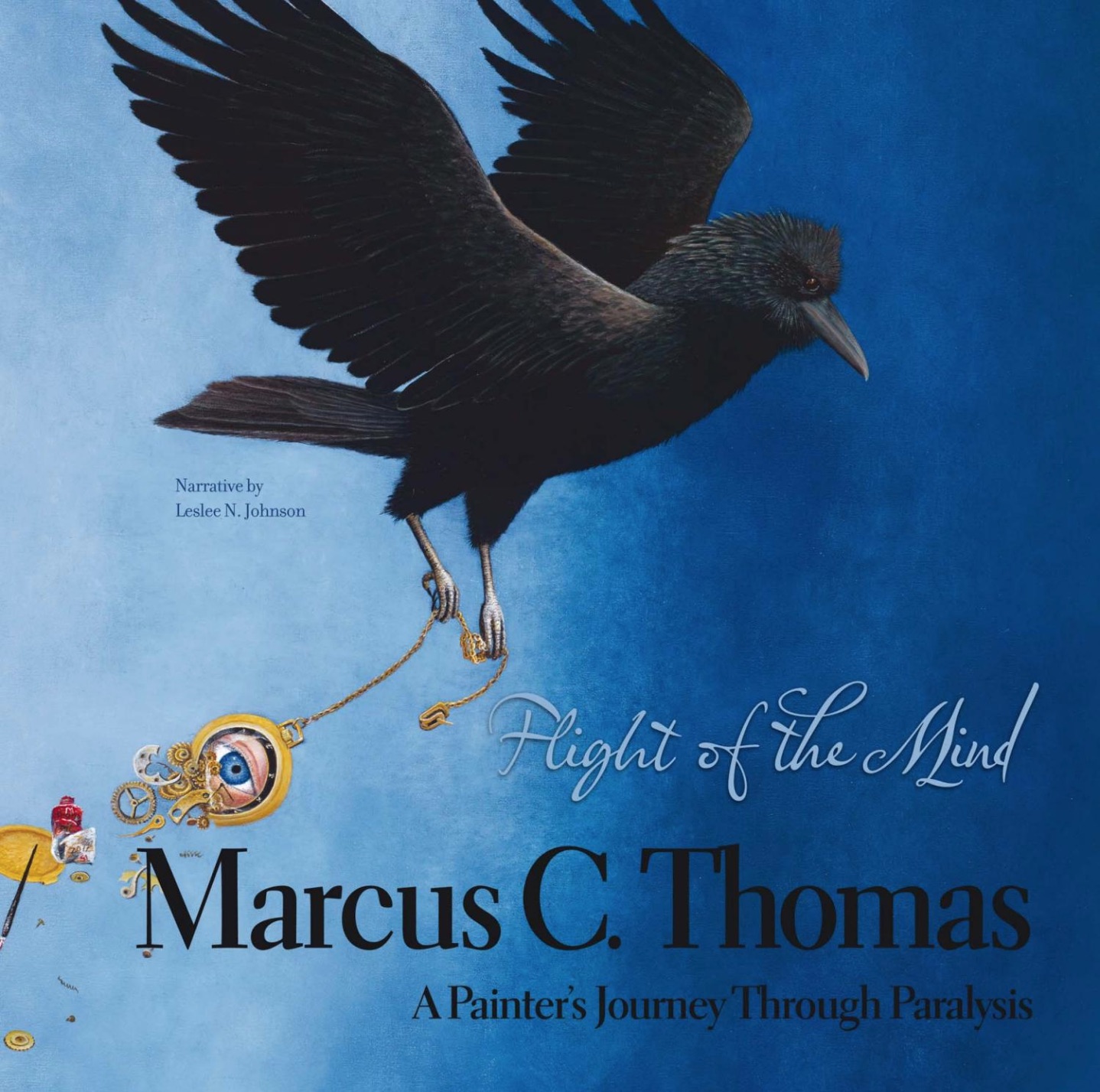 A painter’s journey from paralysis to genius

Can an inspirational book claim your time away from the glut of feel-good features in the media, stories of depravity on TV, and the adrenalin fantasies in movie theaters?

“Flight of the Mind,” a 212-page, gorgeous art book with text, reveals the life of Marcus C. Thomas, a Weaverville painter who learned to create artworks with a mouth-held brush after a skiing accident had paralyzed him below the shoulders in 1986.

Thomas, along with Leslee Johnson, author of the book’s text, and Thomas’ wife and publisher, Anne Gahagan Thomas, present their 25-year retrospective, Tuesday, at Battery Park Book Exchange & Champagne Bar in Asheville. Thomas will also be at various art shows in the area, including today in Highlands.

First, let’s get something straight. Marcus’ artwork is great. It is representational, but also something more—soulful—and, in recent years, increasingly symbolic, or as friend and kindred painter, Julie Speed calls it, “para-real.”

“Such work does not undercut reality,” Johnson writes. It gives “voice to the emotional meaning under the surface of every individual experience.”

A good example is the book’s cover image, a painting titled “How Time Flies.” The raven is in flight, but also eternal-in-the-moment, like an icon. The brushstrokes are expressive, and the bird’s eye is a key element.

There’s another eye in the painting—the artist’s—contained in the timepiece the bird carries. And the timepiece: it’s wrecked and leaking parts, which include the artist’s tools.

The conversations that Johnson had with Marcus about time were very meaningful to her, she says, and overthrew her expectations going into the project.

“I was thinking that the imagery of wings and birds was going to be even more central than it turned out,” Johnson said in an interview Tuesday.

“Being confined to a wheelchair, you think, oh, there’s hours there, and what else do you do? But for him, time is going too fast…You might think, here you are imprisoned, and the clock’s ticking slowly, and this is the rest of your life. Actually, for him, it’s going too fast, and his art is his way of capturing it as much as he can.”

Johnson’s prose sometimes strives for poetic enhancement, especially in the first chapter, as in: “The accident paralyzed his body, but did not ruin the soaring dream deep within.” But the collaboration with Marcus and Anne made her more of a grounded storyteller, and it shows.

She includes many quotes from Thomas, whose wit is memorable.

He once admitted to someone not privy to his mental intensity while painting: “It’s like watching grass grow.”

When he broke his teeth painting the large panorama, “Linville Gorge,” he acknowledged, “I bit off more than I could chew.”

“My voice as a painter,” he explains, talking about his range of themes, “amplifies multiple personalities that include a desperate cry for environmental help, a deathly cold walk through life, endlessly happy days of play, historic conversation about the evolution of flight and simply celebrating the obvious beauty that surrounds us.”

Thomas can talk, and he can type, but his main source of expression is vision.

Recovering from a coma after his accident, he went through many stages of recovery, including learning to breathe. “Starting new again was getting old,” he remarks.

Back home after seven months, “he found his athletic, physical drive concentrated exclusively into his eyes and powers of observation,” Johnson writes. “He started looking harder, noticing details, subtle changes in light, tiny motions; he set about to bring ‘seeing’ to the heights of an athletic pursuit.”

One of the remarkable bonuses of “Flight of the Mind” is its inspirational value. It’s an art book and a tale of a personal journey, not an advice book, yet it presents, in its telling, several tangible examples of how inspiration works.

First, there’s the mystery of the will to live. When he’d been at Mars Hill College (now University), getting a degree in outdoor recreation, he recalls telling coach Pat Sams while out running, “I’d rather be dead than lose the ability to function.”

Yet, he came out of a three-week coma, defying medical predictions, with tears in his eyes; and when he saw his girlfriend, Anne, by his side, he proposed marriage.

There is also the lesson of taking small steps.

“We want people to understand that against all odds, great achievements can be made,” Anne says. “You start with small ideas. You sell calendars door-to-door and work your way up to writing a book.”

The calendars to which Anne refers are the ones into which, in 1988 and 1989, they put Marcus’ first paintings—of birds.

The page in the book that shows the calendar covers faces a page that shows Marcus’ first artwork, a colorful, childlike Christmas card that reads, “Merry Cosmic Christmas,” with a smiling face in a sleigh saying, “Yo!”

That’s great book design. In pictures, one can see another aspect of Marcus’ inspirational story, his discovered talent. The 1988 calendar’s pin-up mallard shows brush control, but is crudely blocked out; the 1989 eagle ensemble is gorgeously subtle.

It takes a family

Marcus’ journey was and is not solo. Family and friends were inspired by and inspiring with love.

It was Anne and Marcus’ sister, Amanda, who, early on, noticed Marcus’ boredom and bought him his first art set. His father, a NASA worker who’d filled Marcus’ youth with model airplane launchings, invented the mouthpiece into which Marcus’ brush fits.

There have been many other influences: family camping trips in Montreat (they’d lived in Charlotte, Florida, and Virginia); Marcus’ older brother Chris, who died of a virus while a student at Mars Hill College; Ken Gregory, an instructor at Mars Hill College, who recognized Marcus’ talent; and always, Anne, who does everything from physical assistance to marketing.

Books have exerted a life-changing influence; Thomas is a voracious reader.

“In a second-hand bookstore,” Johnson writes, “Betsy, Marcus’ mother, came across a slim hard-bound book, printed in 1922, written by Winston Churchill, titled ‘Painting as a Pastime.’ The book immediately became one of Marcus’ favorite testimonies.”

“Armed with a paint-box,” Churchill wrote, “One cannot be bored, one cannot be left at a loose end, one cannot ‘have several days on one’s hands.’ Good gracious! What there is to admire and how little time to see it in!”

Anne researched many art books in order to choose the paper, ink, binding, format, and design of “Flight of the Mind.”

The Thomases and Johnson now have another book planned, Johnson reveals, a new flight of the mind, involving his hummingbird paintings and writing about the “fantastic history of the hummingbird,” Johnson says.

“There’s a mythology around them that relates to environmental concerns—such as the Native American myth of the hummingbird saving mankind by leading someone to water.”

When Thomas first picked up a brush, his life, he says, “became a grand metaphor.”